Sumo Group has announced that it has agreed to acquire Pipeworks, Inc. (“Pipeworks”), an innovative and highly-experienced full and co-development studio, based in Eugene, Oregon.

The acquisition gives Sumo a significant and well-established presence on the West Coast, from which to expand in the US market, and brings an abundance of valuable experience to the Group. The addition of its 134-strong team takes Sumo Group’s headcount to just short of 1000, a major step forward in the company’s growth strategy.

Pipeworks was founded in 1999, with a focus on advanced technology and innovative gameplay for both established and emerging IP. The business has developed or co-developed over 100 games and advanced technology solutions for almost 50 clients and partners. Client-IP games include Madden NFL20 and NFL21, co-developed with EA Sports (Madden NFL). Pipeworks’ clients include Electronic Arts (Madden NFL), Wizards of the Coast, Google, Genvid, and Age of Learning, which both add and are complementary to Sumo Group’s existing relationships.

The acquisition brings additional Own-IP to Sumo Group. Pipeworks recently secured the video game rights to Prominence Poker, a free to play game launched on console and PC, which was originally created by Pipeworks and published by 505 Games.

The business is a leader in the application of emerging technology and game science to adjacent complementary markets, including the US public sector, distance learning, remote healthcare, and AI-driven simulation.

The company also supplies advanced technology and creative expertise, including real-time simulation and artificial intelligence to the US public sector via Metateq. Its proprietary live-game backend technology, COSOMO™, and development/operations expertise have powered many games and advanced simulations since 2011.

“We are absolutely thrilled to be joining Sumo Group. Our ambition is to be the best and most innovative game developer in North America and this will be a ‘level-up’ for all of us at Pipeworks. I’ve known Carl and the team at Sumo for a long time and have the greatest respect for them as a company, as game developers, and most importantly, as people. The cultural fit between Pipeworks and Sumo is remarkable, and we all love to make great games with great partners. I can’t wait for this next big chapter in the long history of Pipeworks Studios,” Lindsay Gupton, Chief Executive Officer of Pipeworks, commented.

“This is a major step forward for our business. Having known Lindsay for some time and been a keen follower of Pipeworks, I am naturally delighted to welcome Lindsay and his team to Sumo Group and look forward to working together and sharing an exciting future. Sumo Group is thriving. This is the largest acquisition Sumo Group has made since IPO. Our underlying market is strong, and we see good opportunities for new games, including Original-IP developed by our talented studios. I would like to thank our team, once again, for their great work, which continues to drive the Group’s success,” added Carl Cavers, Chief Executive of Sumo Group.

Northern Pacific Group Partner, Marcy Haymaker, added: “We have been very pleased with our partnership with Pipeworks and are thrilled to see the company move to its next chapter as a part of Sumo Group. We wish Lindsay and the entire team the very best and look forward to being shareholders of the combined business.”

The graphic below shows where Pipeworks sits in the organisation: 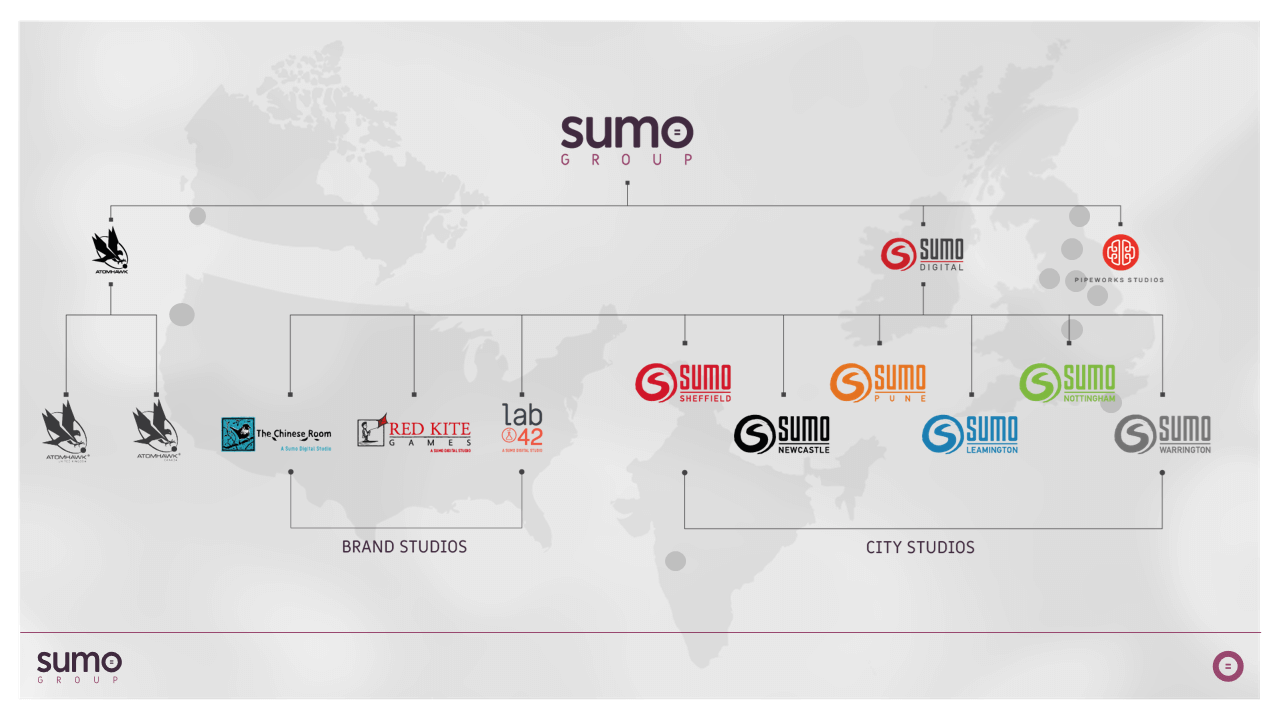 With seven games launched or announced in year to date

Sumo Group, also announces today, another strong set of results today, achieving a 27% increase in revenue and more than doubling its profit before tax in the six months to 30 June 2020.

It’s been an incredibly busy year for the Group so far, with seven games announced or launched to date, including four Own-IP titles: Spyder, Little Orpheus, WST Snooker and Hood, which is an incredible achievement during a global pandemic.

The Group has successfully navigated the operational challenges presented by the lockdown restrictions and continued its recruitment charge, with a further 66 people joining the business in the first six months of 2020, taking headcount to 832. This included 29 staff from Lab42 in Leamington Spa, which Sumo Group acquired in May.

Carl Cavers, Chief Executive Officer of Sumo Group, said: “More people than ever are playing video games, as a result of the pandemic, and the market outlook remains extremely positive. As a Group, we remain very well positioned to capitalise on this expansion in the market both organically and through targeted acquisitions, with a real focus on growing our business further. Our talented teams continue to produce high-quality, interactive content, which is well received by gamers across the globe. We are absolutely delighted with the achievements of our people under challenging circumstances, and, with strong visibility for FY 20, remain very confident in the Group’s prospects.” 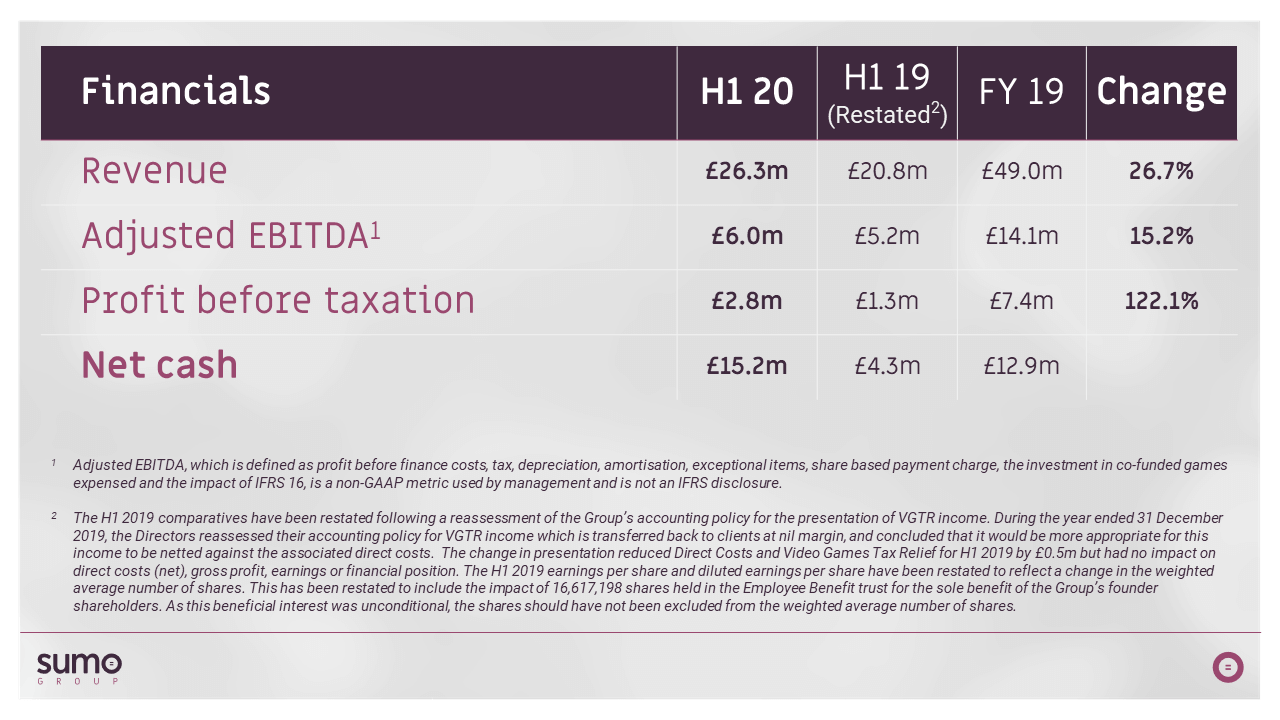